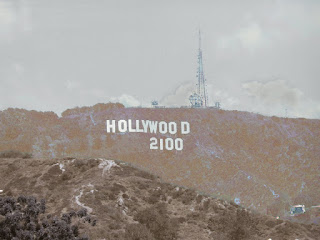 ​
If there really is a strong liberal, progressive presence in Hollywood -- and there is, from producers to directors to writers --  then where are all the global warming-themed movies

in Tinseltown? They just aren't getting greenlighted.

​include even one
single movie with a

​I wondered why and decided to get on the email phone with two experts I trust on this: Edward Rubin at Vanderbilt University in Nashville and Michael Svoboda at George Washington University just a few city blocks from the White House.


Rubin, born and bred in Brooklyn and in his mid-60s now, is the author of a new cli-fi novel titled "The Heatstroke Line," and he's teaching a cli-fi course this semester at Vanderbilt called "Climate Change Literature: a New Fictional Genre about a Real Problem."

I asked the law professor, who earlier in his career worked as an entertainment lawyer for some Hollywood producers, what his take was on the movie capital of the world turning a blind eye to climate change themes, even when the newspapers are full of climate science news items every day now.

​"Climate-themed movies can play a crucial role in educating people worldwide about climate change," Rubin told me by email. "To begin with, people will watch the movie and be moved by it, and they are not going to just look at government charts and scientific research papers."

''Even more important, movies can present scenarios that make large events comprehensible and future possibilities concrete," he added, noting: "What is truly false, and belongs in the category of puerile fantasy, is to deny that climate change is occurring. The fact is that many of the grim possibilities portrayed in a cli-fi movie will become realities unless we take global concerted action."
For Svoboda, an assistant professor of writing and director of the Sustainability Minor at GWU as well as a regular contributor to Yale Climate Connections, where he first began to write about climate change in popular culture, Hollywood's fear of making climate-themed movies sets a bad example for other film capitals around the world, from Bollywood to London. Where Hollywood producers should be leading, they are being lazy and running on fear. The author of a recent academic paper titled "Cli-fi On the Screens," a survey of climate change in over 60 feature films, the professor has done his homework.
​


"For the big Hollywood studios, I think the fear of alienating a segment of the market, due to the polarization of the climate change issue in the U.S., is a factor in whether to incorporate 'climate change' into a plot," he told me. "That seems to have been the case with 'Mad Max: Fury Road.' For the smaller studios, the ones making movies for network and cable TV channels, I think there's a sense of 'been there, done that.' They've moved on to the latest fear in the daily news cycle. And neither group seems to understand the challenge. Climate change doesn't fit into the stories they've been trained to tell."


I asked Svoboda if he thinks things will change.

"I hope so," he said. "As the evidence mounts that climate change is already changing weather patterns, which in turn are affecting the global economy and international relations, I think moviemakers will figure out how to combine the different elements of climate change -- extreme weather, economic impacts, the conflicts driven by food insecurities that result -- into coherent, compelling and new stories."

To move the public on this issue, these stories must also illustrate how we can make the social changes necessary to avoid truly dangerous climate change, Svoboda said.

In a recent oped article Svoboda wrote headlined "No Awards for the Academy on Climate Change this Year," he said that Hollywood producers and screenwriters seem cowed by the politics and confused by the challenge of climate change.
​"The 2015-nominated actors, directors, and films portrayed Cold War-era America, in several places, the Western frontier, the surface of Mars -- anything but the future we actually face," he wrote. "Even in ''Mad Max: Fury Road,'' a major theatrical release predicated on a breakdown of the environment, the words 'climate change' never appear."

''Politics'' is certainly part of the answer, Svoboda told me.

''Over the last decade, climate change became embroiled in America's culture wars," he said. "A significant portion of the American electorate now views 'climate change' as a Trojan horse for 'the liberal agenda.' If a studio has invested millions to create a pop-spectacle, it will hesitate to include political notes that might sour its siren call."

Svoboda said he's hopeful that a new cohort of moviemakers, such as producer and climate activist Marshall Herskovitz, will face climate themes head-on in the future.

"The stories they greenlight in coming years may well influence what humans are able to achieve on climate change by 2100," he said.
​
So how about it,

​liberal, progressive
Hollywood? When will you start making

Posted by DANIELBLOOM at 4:41 AM No comments:

Cli-fi on the screen(s): patterns in the representations of climate change in fictional films In a July 10, 2015 blog post, a journalist ...recalled the challenges separately issued in 2005 by Bill McKibben and Robert Macfarlane.

Where are the works of art, they asked, the fictional works about climate change?

In the 10 years since these questions were posed, the journalist argued, they have been answered—by cli-fi novels and cli-fi films.

Below is brief look at the article, with excerpts until the the story goes public at the WIREs website.

Fictional works about climate change, or cli-fi, have been hailed as a new genre. As a complement to previous WIREs studies of novels and plays, this article focuses on cli-fi films, providing an overview of some 60 films, including major theatrical releases, smaller festival films, and made-for-TV movies. Of the many possible impacts of climate change predicted by scientists, this study finds that filmmakers have focused on extreme weather events and the possibility of Earth slipping into a new ice age. These choices reflect filmmakers’ predispositions more than any scientific consensus and thus demonstrate the challenge that cli-fi films pose to climate change communicators. Finally, noting the recent emergence of films that parody concerns about climate change or that depict attempts to mitigate its causes or ameliorate its effects as possibly more disastrous than climate change itself, this study recommends that researchers in the humanities and social sciences look beyond ''The Day After Tomorrow,'' which has received far more attention than any other film.

This overview is presented in  4  parts. First,
after very brief notices for six notable precursors,
55 films produced since 1984 are grouped by the climate
impacts they depict; then these groups are
reviewed for their unifying characteristics and distinguishing
differences. Only then, second, is the limited
academic literature related to cli-fi films reviewed.
(Because the cli-fi designation is relatively new,
because half of the films in this list are less than 3
years old, and because many made-for-TV and
straight-to-DVD films receive few critical notices, this
paucity of sources is not surprising.) To aid in applying
this literature to the much broader set of films
reviewed here, a critical framework is imported from
work on communicating climate change. Third, the
efficacy of these films is evaluated using this framework,
supplemented by critical observations provided
by the academic literature. The salient results of this
overview, and their implications, are then summed
up in a final conclusion.

‘Cli-fi,’ for the purposes of this overview, excludes
documentaries and advocacy films even if, as in the
case of ''The Age of Stupid,'' they include fictive elements.

And while ‘film’ or ‘movie’ most readily suggest
feature films played in cinemas or theaters, this
overview includes fictional works produced for much
smaller screens, such as those found in art houses,
film festivals, or in homes and apartments (i.e., television
or computer screens). This means made-for-TV
movies and movies released only on DVD or blu-ray
are included, but only if they are full length (85 min
or more) and self-contained (a one- or two-part production).
On this basis film shorts and regular, multiepisode
TV programs were excluded.

Several
strategies were used to find the films reviewed here.
Keyword searches (‘climate change’ and ‘global
warming’) were conducted at the International Movie
Database (IMDB) website.Websites and blogs that
focus on cli-fi or on climate change and popular culture
were scanned for the titles they listed. Other
titles were found through the scholarly literature.
And several scholars who have published relevant
work were consulted by e-mail.

All but two of the films identified in this way
were English-language productions. This reflects both
the actual dominance of English language films in
this ‘genre’ and the difficulty of obtaining the few
non-English cli-fi films that exist. The two such films
that could be obtained (through a major online
American retailer) are both German films, Das Noah
Arch Prinzip (or The Noah’s Ark Principle, 1984)
and F4 (Vortex, 2006).

The former was included
because it is the first full-length work by Roland
Emmerich, the director of TDAT, and it likely
inspired The Storm, a movie made for TV in 2009.
F4 was included because it is discussed in one of the
early academic surveys of cli-fi films.

In a July 10, 2015 blog post, a journalist ...recalled the challenges separately issued in 2005 by Bill McKibben and Robert Macfarlane.

Where are the works of art, they asked, the fictional works about climate change?

In the 10 years since these questions were posed, the journalist argued, they have been answered—by cli-fi novels and cli-fi films.

In fact, by 2005 at least 14 novels about climate change had already been published in the UK and the United States, and what is still the most commercially successful feature film about climate change, The Day After Tomorrow4 (hereafter TDAT), had been released the year before (a point McKibben grudgingly acknowledged).

But the journalist is right: in the 10 years since McKibben and Macfarlane issued their challenges, there has been an outpouring of work.

So much so that the state of ‘cli-fi’ is now regularly updated in the pages of major news venues such as The Guardian and The New York Times ; in magazines devoted to political/cultural commentary such as Dissent and Salon ; in environmental newswires and websites such as ClimateWire, The Daily Climate, and Grist; and in film-trade publications such as Entertainment Weekly. Fictional works about climate change have also been addressed in the pages of WIREs Climate Change. In 2011, Adam Trexler and Adeline Johns-Putra provided an overview of ‘Climate Change in Literature and Literary Criticism.’ Then, in 2012, Stephen Bottoms covered ‘Climate Science on the London Stage.’

Posted by DANIELBLOOM at 11:26 PM No comments: